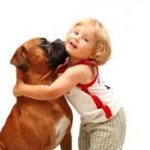 As dog owners we have never doubted our dogs ability to share and experience emotions. Just like us, we know our dogs are emotional creatures, we see it in the wag of their tail, the look in their eyes, the slobbery kiss and never ending show of affection. Science is also going a long way to prove us right, revealing that dogs have all of the same brain structures as we do that produce human emotions.

According to Stanley Coren, PhD., DSc, FRSC, ‘dogs also have the same hormones and undergo the same chemical changes that humans do during emotional states’. And most importantly our dogs even release oxytocin, the love hormone. Dr Stanley says “with the same neurology and chemistry that people have, it seems reasonable to suggest that dogs also have emotions that are similar to ours”. Although they may not have learnt complex emotions such as guilt and pride they do share the same survival emotions such as fear, happiness, anger, suspicion, excitement and love.

We all know we would do anything for our dogs, even put our own lives at risk to save theirs. Would they do the same for us? It appears our bond is far stronger than we thought. A study, published in the journal Learning & Behavior, divided 34 dogs and their owners into two groups to study how dogs react when their owners appear to be in danger.

The dogs and their respective owners were placed in two different rooms separated by an easy-to-open plexiglass door. The dogs were able to see and hear their owners. The researchers asked one group of owners to cry out for help in a distressed voice every 15 seconds and the other group to hum, “Twinkle, Twinkle, Little Star,” and say “help” in a neutral voice every 15 seconds. The results showed that the pups of the gently-humming owners averaged around 96 seconds to open the door while the pups of the owners who sounded distressed took an average of around 23 seconds. Factors such as breed, age and even experience as a service dog didn’t seem to have an effect on how quickly the pups rushed to rescue their owners.

Although a small survey, the results do show our dogs will come to us when we need help and those that believed their owners were in serious danger responded with a greater sense of urgency.  I think you can definitely say that a dog is man’s best friend and so much more!