How To Handle A Dog Fight

Probably one of the scariest and traumatic incidents for dog owners to experience is their own dog being attacked by another dog. If you are in this situation, the number one rule is to remain calm. Do not scream and shout in a panic.  The attacking dog is already experiencing an adrenalin rush and your yelling and screaming will only heighten it’s already frenzied state of mind.

You need to do your best to stay calm and take control of the situation. Remember your dog is looking to you for the signs and signals that you can step up and protect him or her. So panicking only sends the wrong message to your dog and may result in your dog taking an aggressive role further destabilising the situation.

If you can be alert and aware of your environment at all times this is the best way to prevent a dog attack.  If you see a dog approaching that is aggressive and looking to attack your dog then claim your space.  Put yourself in front of your dog and stare at the approaching dog (not direct eye contact look over his back) and tell him “go home” in a firm voice.  Cross your arms and stand tall and upright – you need to appear assertive and dominant. An aggressive dog wants you to be stressed out before it attacks, but if you remain calm and in control, it slows them down and throws them off.

If you can get behind a barrier such as a tree, car or rubbish bin then do so.   You need to move slowly, do not run as this will entice the attacking dog to chase.  Always keep the aggressive dog in-sight and move slowly backwards behind the barrier.  This can sometimes change the focus and intent of the attacking dog.

If you happen to have an umbrella then pop the umbrella up so it is in front of your dog and between you and the aggressive dog.  This makes you appear bigger and have more command of your space.

If the attacking dog does get hold of your dog, do not put your hands anywhere near their head or mouth as you are likely to get bitten.  If you get bitten and injured you will not be able to help your dog.  You can try throwing an article of clothing over the attacking dog’s head (or both dogs) as sometimes this can distract it enough to release your dog.  If you have a pop up umbrella you can open it up between their heads/mouth.  It often scares them enough for the dog to disengage or try getting a large long stick between them.  If a hose is nearby then try spraying the aggressive dog’s head with water, directing it up the nostrils if you can.  These are all tactics to divert the dog’s attention so you or a bystander can safely remove your dog from the situation.  These distraction techniques normally work in a situation where there is lots of noise in the fight.  Lots of noise, although it sounds intense, usually signals a less severe fight and the dogs will normally work it out for themselves.

When it escalates to a dangerous level and you feel you have to physically intervene then you need to be confident and have the appropriate dog handling skills. Professional dog trainers have differing opinions on how to intervene.  A push to the rib-cage can sometimes be enough.  Some say come in from behind and use the wheelbarrow technique where you lift the hind legs and move away in a circular motion to avoid being bitten.  This is best done with TWO people as pulling one dog away can lead to tearing and pulling causing more harm.  If you know what you are doing you can get behind the aggressive dog, grab it by the scruff of the neck and lift upwards.  Again you do not want to pull away.  Lifting up changes the dog’s perspective and advantage (you are now the dominant factor) and the end result is normally a release or loosening of their jaws.  Do some research and become familiar with the options available.  The option you choose will depend on the situation and the dogs involved so staying calm will enable you to step back, assess and make the most effective choice.

Most importantly walk your dogs with the appropriate leads and collars.  Do not have your dog on an extendable leash, you have no control over a situation that may happen 10 metres in front of you.  Also, collars with a proper buckle instead of plastic clips are less likely to snap if you need to grab or restrain your dog or the offending dog.

Understanding dog signals and behaviour is the key to preventing a dog fight, so look for the clues which can include a tense body, hackles up, wide eyes, tail up & stiff, ears forward, furrowed brow, lip curling and teeth bearing.  See below for some common signs to look for and the differences between aggression, fear aggression and arousal. 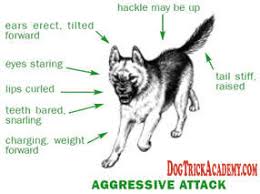 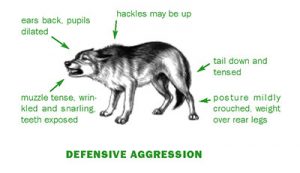 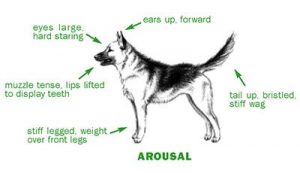